Back in 1994, director Kevin Smith's indie sensation "Clerks" was originally given an NC-17 rating despite the absence of any nudity or violence. The adults-only rating-which translates to box office poison-was singularly due to the film's excessive profanity. With the help of Miramax lawyers, Smith appealed the decision and was eventually handed an R-rating, but not without a lot of hullabaloo in the press.

The Art of Downloading

Ah, freshman year at KU. The millennium was still all kinds of new, I had gleefully moved far away from home and to the dorms. It wasn't quite the cleanest or most ideal living situation, but had T1 internet connections. Having grown up in small town where DSL wasn't available until 2006 and cable internet still does not exist, I literally had no idea that the internet came that fast. It totally ruled.

The Xbox Live Arcade continues its hot streak with several solid titles this summer. Here's a look at some of the most recent additions.

All the moments of a person's life. Junctures of triumph and calamity, love and melancholy and confusion, decision and fog, guilt and embarrassment and shame, euphoria and exhaustion. May lead to a phone call. It could be the point on the teeter-totter where a person starts to fall, or to get back up again. It could affect nothing. Either way, in our moment, someone is on the other end of the phone.

Sitting at home amongst a pile of collectible "Babylon 5" pogs, hand thrust indolently down a grease-stained pair of Alf Underoos and probing various crevices, it's very easy to yell at the TV when contestants on "World Series of Pop Culture" flub a question.

One day Richard Zayas was using his computer-a computer containing about 1,000 songs and a handful of downloaded movies and TV shows, none of which he'd paid for-when he received an email from KU. The MPAA (Motion Picture Association of America) has identified files on your computer that are being shared. You must delete any files that you have for which you do not have the copyright holder's permission. The file that got him busted: Braveheart.

A preview of The North vs. South Festival

If Wakarusa is Lawrence's answer to Bonaroo, then North vs. South is our town's version of the Pitchfork Music Festival. More than 70 acts spanning the independent rock, alt-country and folk scenes converge in Lawrence for three wild nights at three downtown venues. North vs. South mastermind Mike McCoy stopped by our podcast studio to offer his picks to click and discuss the evolution of the festival, now in its fourth year.

The Bigs is nothing revolutionary, but it proves to be an entertaining experience for a limited amount of time. After spending several hours with the Rookie Challenge mode, the slightly shallow gameplay starts to grow somewhat tiresome.

I thought I'd write about something that gets to the very heart of why we love zombie movies so much, even though sometimes we don't even know it: The zombie metaphor.

If you have read anything about this movie, you are already aware that its exotic locations, artfully designed camera angles, and colorful art direction make it a unique experience. What I'd like to mention, then, is something equally, if not more, remarkable: the performance of its lead actress, the young Romanian actress Catinca Untaru. 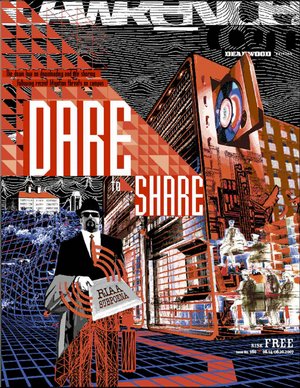