Don't 'Talk to Me' about standard biopic cliches

Petey Greene was an ex-con who made his way onto the influential station WOL-AM in Washington, D.C. during the late '60s. There, the disc jockey became an unlikely community leader and outspoken straight-talker during the Vietnam War and civil rights movement. Director Kasi Lemmons ("Eve's Bayou," "The Caveman's Valentine") helms "Talk to Me," a biopic of Greene's life with the reliable Don Cheadle in the lead role.

The Rest of Her Life

A few years back, Laura Moriarty hosted a board game/tag sale fete in her home. She was out of here-with her creative writing master's completed and a fellowship at Phillips Exeter Academy on her horizon, she rolled out of Lawrence with her old dog, the skeleton of a story, and not much else.

When wielded skillfully, the words "public safety," as every good politician knows, can be a mighty tool. Those words can lead a country to war, protect citizens from each other (smoking ban), or from themselves (seatbelts), or, in the hopes of at least some Lawrence city commissioners, give the city the power to shut down nightclubs.

Sand in the oyster

The images of your day are pearls to Alec Joler. "I really like the idea of found imagery and assembling different things," Joler explains, setting up a theme to his varied visual work.

It started as so many things start, a simple friendly wager. A kickball game between the employees of the Free State Brewery and Rudy's Pizza with the winners reaping either pizza or beer. Six years later it is a full-blown local phenomenon known as the Kaw Valley Kickball league: two conferences with four divisions-24 teams in all representing local businesses like the Red Lyon, Yello Sub and Wildman Vintage Clothing.

"I aimed for the public's heart, and by accident I hit it in the stomach," lamented Upton Sinclair about his misunderstood, landmark polemic "The Jungle." Turning Sinclair's bellyaching on its head, the organizers of the "Go Organic!" film festival are hoping to spur social change by aiming directly for the gut. Lawrence activist group Films for Action have teamed up with national non-profit Sustainable Table to screen the Rural Route Film Festival.

No review is going to change the money-printing machine that is the Madden franchise. Hardcore gamers will continue to despise it, casual fans will continue to eat it up, and EA will laugh their way to the bank. However, no matter what anyone says, it's still the best football game in town.

If I had to pick one person from Hollywood to helm and star in a loving tribute to the old school screwball comedies of the 1930s, it would be George Clooney. He's already shown he can act exaggerated repartee to perfection in the Coens' slapstick and slapdash Depression-era Homer interpretation "O Brother Where Art Thou?" Able to spit out a wordy froth of Olde English and Southern drawl in machine-gun fashion, Clooney earned himself a Golden Globe and helped make that film a cult classic. 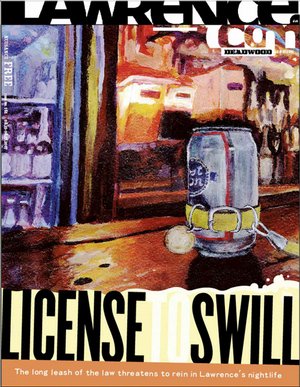