Pop the new SideWise CD in your car disc changer and you might think you've turned on the radio. Slick as a Vaseline-smeared piggie and loud as the first row of Lollapalooza, "Siren" comes roaring out of speakers with the same velocity afforded to major-label acts

With the priority points system settled in, familiarity at KU sports games is a fleeting thing

Through the windows of this country house north of town, the boiling sun shines down upon the relics. By the front door, to our left is a letterman's jacket worn by David Shirk, captain of the 1938 Jayhawk football team. He played end (both offensive and defensive). To our right is the radiator under which once rolled a wedding ring dropped from the small hand of a 5-year-old flower girl, Margaret.

The pomade-slathered grease monkeys "Los Punk Rods" were conceived in a North Lawrence garage in 1999. Back in the day, this informal cabal of custom car gearheads would show off their handmade hot rods to like-minded modders at intimate picnics in Burcham Park, knocking back beers and enjoying some rockabilly tunes.

Wherein we peruse the news that was news last week.

'Death at a Funeral' dies a slow one

You might think that with a comedy titled "Death at a Funeral," (**) part of the fun would be trying to guess exactly who is going to die and when. Instead, this British farce becomes nothing more than a waiting game, trying to determine just when all the elaborate set-ups for multiple characters are going to start paying off. When the zany climax finally comes, it is too little too late.

TOWNIE GUIDE TO: Being a Jayhawk fan

At no point did my interest in the gameplay or narrative wane. It's a haunting, captivating, beautiful title that should convince the Roger Eberts of the world to rethink their "videogames can't be art" viewpoint.

The legacy continues...A lot of people have trouble admitting they like Brett Ratner. He may have no individual auteuristic style that's noticeable, but he knows how to make 90 minutes whiz right by, especially in "Rush Hour 3," a movie I was prepared to hate and was surprised to find that I liked. Feel free to start up a chat about other Ratner nuggets "Red Dragon" and "X-Men: The Last Stand." 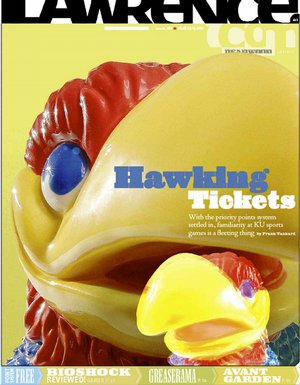