THE END IS NIGH and somehow we know it. It blackens our souls and poisons our dreams. Wrath, envy, greed, sloth, gluttony, lust, vanity-these are the hallmarks of human civilization. Our institutions are corrupt, our perceptions distorted. We have become evil, hell-spawn, irredeemable by love. Someday a rain's a-gonna come and wash it all away. Hurricanes, tsunami, cyclones-they will cleanse the world of our evil. The fires of war and cataclysm will purify the land. The temples of the money-changers will crumble to dust. The earth will swallow you whole. And those that remain-the chosen few-will live on in the kingdom of God.

Last week we got a call from Santa. He's the Lawrence-based Santa who also goes by Chris Hartman. You might remember him from a lawrence.com story from a few years ago called "Bad-ish Santa: Cannabis Claus doubles as pro-hemp humorist and Santa's helper." It continues to be a story that we get a lot of feedback on.

Kate von Achen made her second trip to Uganda in January. She was with a group called Global Youth Partnership for Africa, one of 13 Americans and 13 Ugandans there for a three-week case study on the two-decades-long civil war in northern Uganda.

The temperature was 59 degrees:A baby's bottle with a small amount of milk left inside was found in a grassy area along New Hampshire Street, between The Java Break and a parking lot. No more than two yards away lay a discarded beer bottle and a cigar wrapper...A bald man in an American flag shirt walked past and didn't respond to the question, "How ya doin'?":

Democrat$ and the FI$A Bill

Moore and Boyda both receive funds from telecom companies, vote yes on the new FISA bill. Plus a gratuitous book recommendation. 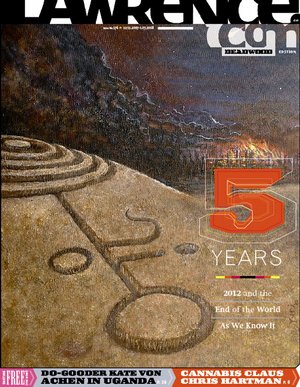