Get Up, Stand Up. Get Naked.

Revolutionaries fight the power with flesh and bone

In a storefront directly across the street from the county courthouse, people are plotting against the system.

The Candidate in Black

Singer-songwriter Jake Davis campaigns to save the 'heart of Lawrence'

You might have caught him performing in dives about town as folk-rock troubadour Basin, but Jake Davis is now asking for your consideration in a different venue: the political theater. Fed up with what he sees as "too much meddling" from the bureaucratic machine, he recently announced his candidacy for Lawrence City Commission.

A culture of vaginas. How strange this phrase this might have sounded some 11 years ago, before Eve Ensler's "Vagina Monologues" was first performed in a New York cafe, before the first V-Day was held two years later on Valentine's Day, before the movement hit Lawrence three years after that. Before the pink of February took on an additional meaning.

What do you think an army full of lawrence citizens would look like???

I hear they may reinstitute the draft / Willie Nelson pube drawings 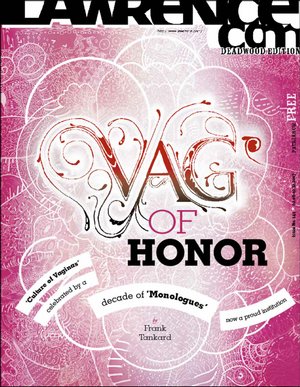