'Astronaut Farmer' is lost in space

"The Astronaut Farmer" is not a movie for cynics. From a laughable title with a jokey double meaning to a formulaic plot that charges ahead seemingly unaware of how ridiculous it is, this is one bold movie.

The shocking truth about the Roman Numerals. Well, the truth anyway

Rather than resorting to retro reverence, Roman Numerals embrace creative revisionism: the sound of the past informed by the future, as if Big Black had visited early-'80s era Gang of Four in a vision, or if the ghost of Fugazi had haunted Modern English.

Taking it to the streets

"You could break a finger, or your wrist, or your ankle or your foot. It was very raw. You could pass out drunk and someone would take advantage of you-and that was if you're a guy."

The main complaint most people will have with this game (and any college sports game) is clearly an unavoidable one. As rabid as KU fans are, I have to imagine that they'll be disappointed by the absence of Julian Wright, Brandon Rush, and the rest of the team's likenesses. It's obviously no fault of the game, it's just an unpleasant legality.

The one asking about NaNoWriMo 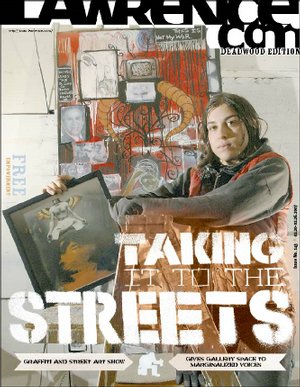