Lawrence's most famous (and infamous) counterculture icon remembered 10 years after his death. See our special section

Lawrence. Kansas. Burroughs was frequently asked-as all Lawrencians inevitably are: Why Kansas? When you could live anywhere-in any of the world's cultural capitals-why Lawrence, Kansas?

The Life of William S. Burroughs

William S. Burroughs is 10 years gone now and only vestiges remain. His little Datsun and an old typewriter rust in a thicket behind the red house where he lived at 1927 Learnard Ave., and on drunken Friday nights citizens of a certain age may emit stories of the times they saw him buying cat food at Dillons.

An interview with James Grauerholz

James Grauerholz is heir and executorof the estate of William S. Burroughs-maestro of the Beats, writer of "Naked Lunch," international queer, academic junkie, wife-shooter, Harvard graduate, an undeniably American artist.Grauerholz lived 30 years with Burroughs.Street Level joins Grauerholz in a booth at Pachamama's for a moseying reminiscence of Burroughs and the Beats...

Memories collected from the FOBs (friends of Burroughs)

"Most of his peers are dead-who's left? People who really were his disciples. They were sort of the Matthew, Mark, Luke and John to the Antichrist." -Dennis Domer, professor emeritus of American studies at KU.

A piece by Jim McCrary

I've been asked many times to put something up about William Burroughs in Lawrence, Kansas. Sort of. Okay, once someone asked me WHAT he did out here. What he did? All this because I had the extreme privilege to work for William Burroughs as Office Manager for 10 years, as well as the opportunity to spend time with him on a daily basis doing well...nothing most of the time...until William died August 2, 1997. William, of course, had a steady stream of visitors in Lawrence, and one of those was his best friend, Beat poet Allen Ginsberg. I use William and Allen's friendship to offer a 'snapshot' of what I observed.

An interview with David Ohle

David Ohle met Burroughs in the mid-'70s while teaching at the University of Texas at Austin. They became close friends after Ohle moved back to Lawrence in 1984. Ohle is the author of two novels (plus one forthcoming) and many short stories. He earned his master's degree from KU in 1972 and teaches fiction writing and screenwriting at the university.

An interview with Wayne Propst

Propst-who calls himself a "leisure consultant"-is an experimental artist and raconteur. Scatterbrained fascination oozes from his pores. He calls himself Burroughs' student.

Hell, Man, I'm Not Gonna Shoot 'Em Way Out There!

A piece by Jon Blumb

The first time I set up a shooting range for William Burroughs, I went out to the farm early and set up targets on a board, an improvised table, and lawn chairs. When I brought William to the spot later that afternoon, he sized up the distance, commenting, "Hell, Man, I'm not gonna shoot 'em way out there! Move 'em up closer-most gunfights are just across a room!"

One of William S. Burroughs' chief activities in his Lawrence years was creating art. After receiving a kick-start in the form of a celebrated opening at Tony Shafrazi Gallery in New York in 1987, his art was in some demand by curators and collectors for the rest of his life...

I never feel the heat closing in, this 10-year specter over my head, setting up his flaccid old man revenge fantasy, putting a curse over me and my home maybe a higher-up elbow in Kansas City, vault a decade and two cities, catch a flexible writing gig:

A poisonous lie is the sum total of what Burroughs accomplished.

A piece by Mark Luce

My son, Miles, was conceived in William S. Burroughs' bedroom. Perhaps I should explain.

Remarks on Behalf of the Community

We gather here today as a community of men and women who admired and loved William S. Burroughs and were transformed by his extraordinary life. We are here to mourn William's death, but that is a secondary matter...

A guestbook for readers' recollections of the Old Man 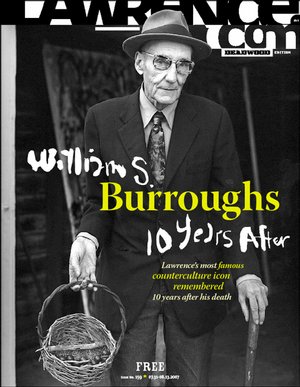