In 2003, the inaugural Wakarusa Festival was met with open arms-and skepticism. But with each passing year and tens of thousands of people through the gate, Lawrence's most ambitious event establishes the kind of staying power that it promised in the first place. Headliners like Widespread Panic and Ben Harper were once but wee daydreams, but this year they'll be backed by a jam-heavy lineup that also sports top draws like Yonder Mountain String Band, Medeski, Martin &amp; Wood and Michael Franti and Spearhead. Toss in more than 100 more rock, jam, bluegrass, funk, alt-country zydeco, jazz, blues and experimental bands and you'll begin to understand why showering and sleeping are way overrated.

Heck of a Job

Lawrence anarchists vs. FEMA anarchy in the rubble strewn streets of Greensburg

So far as oxymorons go, "anarchist organization" is right up there with "military intelligence" or "jumbo shrimp." Kansas Mutual Aid (KMA), however, isn't exactly a Molotov-hurling band of latter day Guy (and Gal) Fawkes bent on destroying society.

Fans of Minus Story are generally hardcore fans, and for good reason. The band's records are absorbing listens, crafted with the meticulous spirit of a fiction writer or glass blower.

Staples of Lawrence's hip-hop scene since 1999, vocalist Isaac "iD" Diehl and vocalist/DJ Jeremy "Nezbeat" Nesbitt of Archetype take pride in the musical progression both experienced from their first album, Freehand Formula through 2005's well-received Bleed for Them.

Hey, did you ever think that bare wall on the parking garage at Ninth and New Hampshire would be the perfect place to screen movies? Yeah, you and about every other visionary who's used that lot as a public urinal after last call.

The Future of Food

An announcement came last month: Kansas is going to help solve the world's diarrhea problems by hosting a crop of pharmaceutical rice near Junction City. Two-hundred-fifty acres this year, and up to 3,200 acres later on. The rice contains a protein that could be used in drugs to treat diarrhea and dehydration in developing countries.

For the Jayhawks to advance to another Final Four, the freshman class needs to grow up in a hurry.

Sorry, Roy, But I'm Not Buying It

Roy Williams is making national headlines for winning games in January. We've seen this song and dance before. 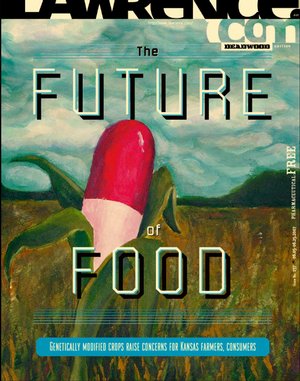