Lawrencian Rob Pope puts his bass all up in Spoon's face

Rob Pope has fashioned a career of playing the bejeezus out of the bass, and the former Get Up Kid and current White Whale anchorman snared his biggest gig to date when indie-rock hitsters Spoon invited him into the fold for their new record "Ga Ga Ga Ga Ga"

The Geek Shall Inherit the Earth

My time on VH1 by Eric Melin

There are some serial TV shows I will tape to make absolutely sure that I don't miss an episode-"Lost," "24," "The Shield," "The Office." My priorities may be a little out of whack, but staying on top of my favorite TV shows is more important to me than paying my bills on time.

A pleasant slice of conversation over lunch with Kalli Sanders at Java Break: Back when she had pancreatitis, there were about 12 months straight when she always had some kind of unnatural hole in her body-like a drain, an incision, you get the picture.

While KU point guards and quarterbacks may get all of the glory (and all of the glorious venereal diseases?) there is an unsung cadre of elite gladiators who also test their mettle on behalf of Lawrence pride.

The philosophy and art mayhem of KT Walsh

KT Walsh is a compulsive artist, marrying pre-existing, found objects to traditional materials like paint, chalk, and poetry. Nature plays into the sculptures, too, as does her old house. The result is frenetic, but oddly homey. Comfortable. This is a celebration of life at its most blessed-completely harmonic, intrinsically bizarre, gorgeous to see.

The 10 Commandments of Rock

Marry Me Moses could be the name of a nun's autobiography or a Judeo-Christian marriage seminar. But here in Lawrence, Marry Me Moses is synonymous with face-melting rock riffs, more or less. The industrious group recently ascended Mount Sinai (a.k.a. Neighborhood Studios), and recorded their debut tablet (a.k.a. album), "Engine Engine."

I was very excited about the potential of this title, but ended up disappointed at what seems like a lackluster port of a Gamecube effort. Fans of the series will find more of the same with Mario Party 8, for better or worse.

This weather stinks (and so do I)

Hot-weather commutes can make for smelly co-workers. At least they're not naked. 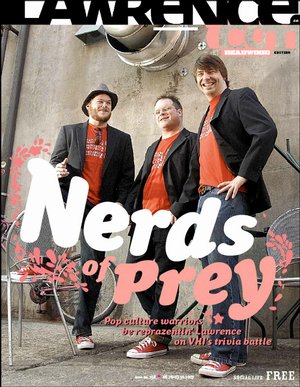