"Zodiac" is a story of obsession focused on the serial killer who taunted police and terrorized the Bay Area in the early 1970s.

The Call of the Wild

It's Saturday night. Girls Gone Wild is in town.

So here I am on Saturday night at this new tiki bar in Topeka called Sharkey's. It's next to a strip club and shares a parking lot with a bowling alley. Out front, the Girls Gone Wild bus takes up eight spaces and promises a good time.

Rob Riggle is nice. That's not to say that he's overbearingly friendly or phony pleasant. He just doesn't have the monster ego or narcissistic characteristics you might expect from a star on of one of TV's most influential programs.

A Tale of Two Cities

Suppose the undulating lifeblood of Lawrence's youth culture is its nightlife and music scene. Suppose this culture has the potential to live or to die as Lawrence changes and grows.

Five Trans Folk Executed in the Past Month

Even though you won't believe me I am going to tell you about a frightening national wave of violence against trans folk, particularly trans women. 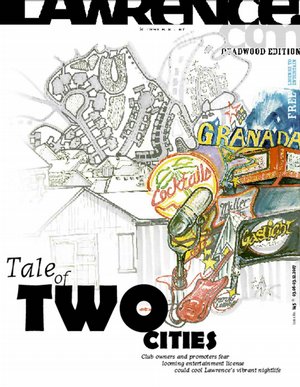