Sometimes the best movie in town isn't actually in the movie theater. Don't overlook these recent releases on DVD.

Those who think Kansas has closed the final chapter on its evolution debate better think again. Although the calculated effort to replace evolution in public schools with a brand of science more acceptable to fundamental Christians is momentarily on the decline, it is far from dead.

Lawrence producer lays down the dos and don'ts of the recording studio.

Ed Rose's production resume comprises a who's who of local and regional rock bands: The Appleseed Cast, Butterglory, The Casket Lottery, Coalesce, Arthur Dodge, The Esoteric, The Get Up Kids, Kill Creek, Reggie and the Full Effect, Slackjaw, Stick, Ultimate Fakebook, Vitreous Humor and White Whale, to name a few.

You might know of "Tribal Vision" as the Lawrence collective of DJs and artists who throw badass dance parties with a social conscience and occasionally screen documentaries at Liberty Hall. But unless you've lingered in the nosebleed channels on basic cable, you've likely missed out on their latest endeavor-"Films for Action."

A conversation with printmaker Shawn Bitters

In a short time, we have progressed from wanting to respect and protect the environment (you know, all that stuff outside) to worrying about our carbon footprints and our monetary support of pesticides-in other words, our role within the environment. Makes sense, then, that art will evolve from its millennial adoration of nature to an exploration of an individual's experience within it. 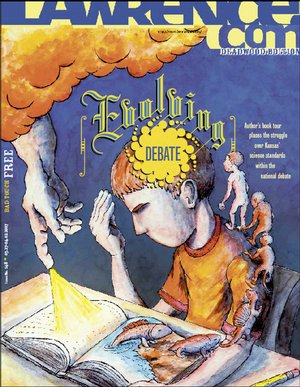