Mini reviews: TV on the DVD

DVDs are a wonderful thing. Not only are we able to watch clear transfers of classic films, but it seems that every TV show under the sun is now available for hours and hours of couch potato pleasure. Need something to watch on a long hangover Sunday in front of the TV? Try renting or buying one of these box sets of stellar shows you may have missed...

When last we spoke with Nancy Boyda, she was waging a quixotic campaign to represent Kansas' 2nd Congressional District-including Lawrence-as a grass-roots Democrat in a blood red state.

It Is Well With My Soul

About a year and a half ago, Paul Mirecki made international news. Scourged by Christian fundamentalists for his derisive opinions of those lobbying for creationism in state science standards, and chastised by the University of Kansas for his incautious expression of those views, Mirecki resigned the chair of KU's religious studies department.

Behind the doors of Lawrence's communal menagerie

These people are strange. There's the guy wearing the utility belt, and the guy lifting up layers of fungus in a pot and asking if you'd like to drink the liquid beneath, and the gals giggling so loudly as they sing "Ring around the rosey!" like maniacs. These people live together in co-op houses that are not exactly clean but not exactly dirty.

TOWNIE GUIDE TO: Workin' on your fitness

Blake Miller isn't exactly a townie, having grown up in the suburban wilds of Kansas City. But he's spent the last four years in Lawrence, where he runs his own web design company and devotes much time to bicepular hugeness.

Unfortunately, this once-entertaining franchise has lost its luster and become a tedious chore of an experience. There are just too many aspects of the game that clearly needed more time in development.

Breaking all the rules

Typically, we applaud lawlessness. There's one rule, though, we'd like everybody to obey.

None of these stories are about Ann Coulter. Because Lawrence.com needs a Coulter-free space. 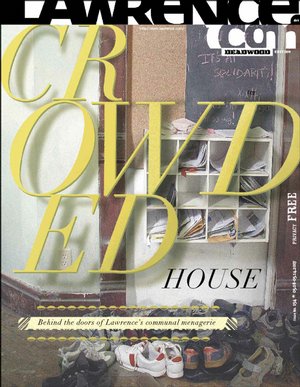