At the heart of the new indie romantic comedy "Waitress" are the creative concoctions of its title character, Jenna, played by Keri Russell. Pies have always been the truest expressions of her soul, and the patrons at Joe's Pie Diner look forward to each delectable new recipe.

After some five years of playing around town, Fourth of July is finally preparing to release its first full-length album. The wait paid off in the form of a supremely rehearsed sextet that laid down a vibrant collection of tracks full of harmonies, keyboards, horns and tambourines.

With plans for a new development stalled and new property owners in place, the fate of Yello Sub at the edge of KU's campus is again up in the air and The Crossing could be the next to change hands.

Three in the afternoon. Finals week. The Crossing. Sun shines in through the open door. Tom Petty plays on the speakers. Behind the bar, the bartender does the sudoku with her legs crossed. Students fresh from a final play beer pong. All seems right with the world.

I have never been on a plane ride that didn't come with free orange juice and pretzels. I certainly haven't been on a plane like this-small, loud, with three crazy passengers packed in like pigs headed to the slaughterhouse along with the pilot and me.

Sum of All Things

Ben Ahlvers grew up in Granite City, Ill., a blue-collar town northeast of St. Louis. Like all manufacturing towns, it's struggling: the community profile web site glosses over the "in transition" downtown culture and promotes the ease of parking at Wal-Mart.

We're talking about All-Stars this week. And, no, that doesn't mean the seedy north Lawrence strip club.

Golf course fees on the rise

Also, the death penalty may not be unconstitutional. And President Bush makes a surprising admission. 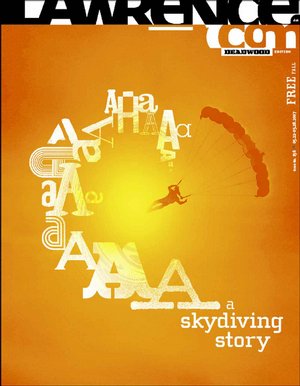