If the Slipper Fits

If one were looking for an abbreviated introduction to Lawrence's best new bands, KJHK's Farmer's Ball would be the ideal place to start. The competitive aspect of the annual battle-of-the-bands usually takes a backseat to the camaraderie, which is usually in full effect despite a wide breadth of musical styles. This year's crop features eight wet-behind-the-ears acts that will go toe-to-toe in preliminary bouts Thursday and Friday and seek a knockout blow at Saturday's finals at The Bottleneck. We harvested the freshest tracks from all eight ballers into a podcast preview of the 2007 Farmer's Ball.

The Little Stories that Could

KU assistant professor Deb Olin Unferth had a book of short-short stories called "Minor Robberies" published by McSweeney's in September. It is included with two other books of short-short stories, by Dave Eggers and Sarah Manguso, in a collection called "One Hundred and Forty Five Stories in a Small Box." It's awesome. You read one, and it's so short, you're like, "I'll just read one more." And then it's 2 a.m. and you've finished the book before you know it. And it fits in your pocket (if you have a big pocket). Unferth is originally from Chicago and came to KU in 2005 to teach creative writing.

The stories of two couples and the war in Iraq

We wanted to do a story about people in the war. Something we could write from Lawrence. We decided to focus on relationships. After trying to track down a few couples in the past few weeks, we got responses from two pairs of people. The first is a couple that broke up over the course of working on the story. The second is a couple that made it work despite dating for only two weeks before one of them went to Iraq. We also interviewed a Kansas State professor who studies military relationships and is retired from the Army Reserves. Here's what we got.

Wherein we review the news that was new last week...

By titling his new epic look at the late 60s/early 70s heroin trade in New York City "American Gangster," director Ridley Scott is already asking us to consider what it is that makes the story of rags-to-riches drug peddler Frank Lucas and uncorrupted cop Richie Roberts so uniquely American. But its the even-handedness of his storytelling that makes that question so hard to answer.

We take a look at the games of late October.

A state senator wants $750,000 appropriated to build a road to the soon-to-be-closed ammunition plant in Parsons, but House members say that would be a waste.

Officials to discuss future of water in Kansas

Kansas reservoirs provide water for two-thirds of the state's population in addition to providing water for industrial, recreational and agricultural use.

And what will become of KPERS? 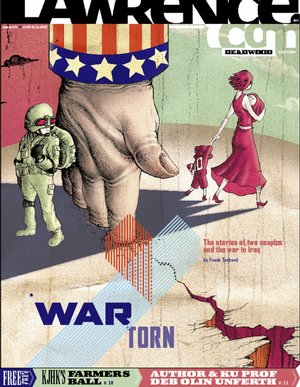