A punk pot-luck of vegans, oogles and ghosts at DIY music pad, the Haunted Kitchen

If you're a "scumfu*k" or an "oogle," best just keep on moving. The Haunted Kitchen doesn't need your type spoiling the delicate bouillabaisse of face-smashing hardcore music and cruelty-free vegan cuisine. The punk ethic of this house venue on the corner of 19th and Louisiana burns bright enough to sear a good-sized loaf of Tofurkey with sheer indignation. Don't let the decomposing porch and beer-soaked dilapidation fool you-while those who live here aren't very passionate about property value, they're dead serious when it comes to the manifesto of the Haunted Kitchen.

Everyone's got at least one thing in his or her life that could use a serious redo, but in most circumstances physics or the irreversible march of time renders that dream impossible. One can't take back a bad relationship or a bad decision-but in the case of the Pedaljets, the members have gotten their chance at a big do-over for their second album, which in large part led to their breakup in 1990.

A friendship, a photo exhibit, a way of life

Now this is a fascinating subject. Screw waterfalls, birds, leaves, trees, doors, houses and other lame subjects. Let us have a bunch of pictures of Wayne Propst lining the walls of the Bourgeois Pig. Perfecto. For those who are unfamiliar with Wayne Propst, he is the kind of person one might describe as a "local character." He lives on a farm north of town. He trades junk, fixes things, makes art, talks loudly at the Bourgeois Pig. He was a compadre of William S. Burroughs. He is difficult to define. This is why I asked him to define himself in a capsule.

How Barack Obama's road to the White House leads through Kansas

Barack Obama's presidential campaign had a novel idea: How about we run a truly national campaign and not treat smaller states-say, like Kansas-as the electoral equivalent of an inbred cousin who no one speaks of and is only brought out of the basement once every four years.

The legend of David Ohle was born in 1972 with the paragraph, "Moldenke lived the hainted life. As a child he was kept in a crumbled brick of a house where thick windows moaned in their frames through summerfall and gathered ice by winter." This was on page 98 of the January issue of Esquire, opposite a surrealist painting of a dismembered hand holding a telephone receiver on a stool swarming with insects. The story was called "Some Moldenke," a strange, fragmentary piece starring a listless, almost translucent observer in a bizarro world.

Is this a movie or an 88-minute civics lecture?

We take a look at the games of early November. 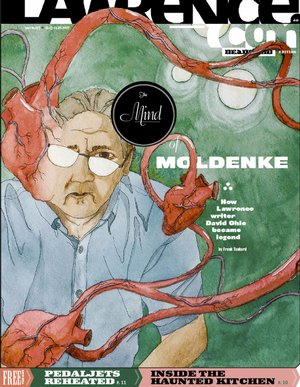