A very special gift guide, from Lawrence with love...

Woman in business casual navigates tiny, rodeo-clown car through shopping mall best she can, bumping into a throng of clone-like shoppers (choice of car is for comedic effect). Irritating Christmas music blares (think Mannheim Steamroller). Voiceover (tired, exasperated voice): "I don't know what to buy." Woman passes Helzberg Diamonds, Foot Locker, Macy's, etc., all with lines snaking out the doors of shoppers burdened with tons of bags (all labeled "SHOP"). Creepy salesman-types with dollar signs for eyes can be seen in the stores hovering over cowering shoppers. She is about to give up. Then, at the very end of the mall, she catches a glimpse of the lawrence.com store.

Some days, simply waking up can slay the most capable of adults. Some of us may only have work to manage, and that can definitely be enough-but we're not Matt Pryor. Since forming The New Amsterdams in 2000, the band has managed to release nearly an album a year, whether under that name or under the moniker of the kid-centric version of the Ams, the Terrible Twos. Add three young children to Pryor's family, two large dogs and commitments to the Little Red Schoolhouse-suddenly 'busy' becomes relative.

The universally admired Peace Lilly that occupied the apartment building on the corner of 17th and Ohio streets has gone missing.

This holiday season, give the gift of love

Yes, it's curtains for Thanksgiving, and the long-drawn period generally referred to as the holidays has dawned. So many traps to fall into this time of year. Avoid them at all costs.

It is oddly appropriate that the oldest surviving epic poem in the English language is the inspiration for the latest in motion picture technology. Director Robert Zemeckis tells the 13-century-old tale of Beowulf, the original larger-than-life Anglo-Saxon hero, by using equally larger-than-life cinematic techniques.

When it comes down to it, you'll love the majority of Guitar Hero III if you've been a fan of the last two installments. If they weren't your type of game before, there's nothing that will change your mind with this one.

Sebelius cited as 'one to watch'

A tip about vacationing and exercise, and a new record for Dog Day's Saturday runs 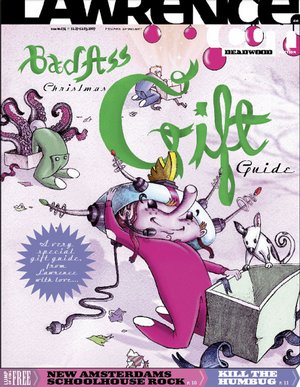