Although he adamantly refuses to be defined by it, Andrew Roufa's wrenching personal history and its influence on his hip-hop persona, Adru the Misphit, is difficult to ignore. Born in Texas and raised in Manhattan, Kan., the 33 year old Roufa has spent many of the last 10 years in mental or correctional institutions following an LSD triggered slide into what doctors diagnosed as bipolar manic-depression.

Townie guide to... getting hitched

Review: Across the Universe

Halo 3 more than redeems the relative shortcomings of its two predecessors, and the sounds of the game will surely be pouring out of millions of living rooms for years to come.

"Dark Water" is a slow ride down the drain

A scene where a dazed Jennifer Connelly lies on her back, letting water slowly drip on her face becomes a metaphor for the entire movie. 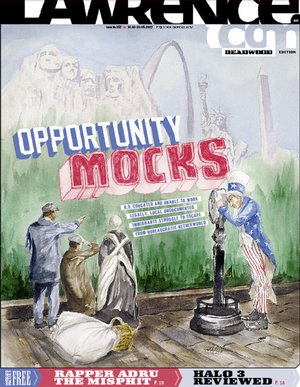