Despite talk of 'going green,' trash keeps piling up in nearby landfills

"Twelve-hundred acres, 260 feet deep. That's a lot of trash," says Ed. For a decade as an operator at a nearby landfill, this was his line of work. (Fearing potential reprisal from his former employer by agreeing to be interviewed, Ed asked that we not disclose his name.) "It was all we could do to dig a hole fast enough." Forget air pollution for a moment. Forget global warming. Forget pressing issues that, for most of us, exist only in the abstract, like nuclear waste and deforestation. Ed wants to talk about trash. Plain ol' trash.

E.M.U. Theater gets in the Halloween spirit with short-play fright fest, "Horrorshow"

One can only assume that, in the theater community, loss of bowel control among your audience is tantamount to a standing ovation. So when a performance space at the Lawrence Arts Center became available in late Ocotber, the E.M.U. Theater Company couldn't resist the opportunity to scare the crap out of people.

Way back in the late '90s, when Napster and Y2K were in fashion, a merry band of metalheads united in conquest of fame and fortune-or maybe just fun. They called themselves Pomeroy (not to be confused with the consulting group or college-basketball ratings) and developed a slick sound incorporating funk, hip-hop and rock influences.

One of the toughest and most intangible things for a first-time director to capture onscreen is a consistent mood or tone. In his directorial debut, Ben Affleck creates a strong sense of locale that permeates the entire story and becomes its most affecting element. It is familiar turf for Boston native Affleck, and his movie introduces a bleak environment haunted by the specter of missing and abused children.

I can't overstate how impressed I was with Phantom Hourglass. While Twilight Princess was an undeniably fantastic game, this title does more in terms of bringing the series forward.

Answering the call of SUPERSTARDOM. 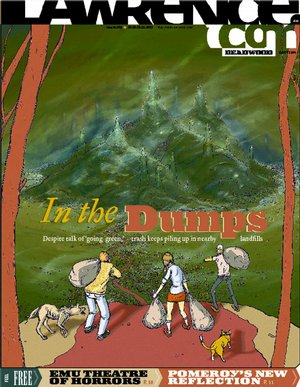