Strange seeds of convergence were planted two years and two months ago when Hurricane Katrina hit New Orleans. Only in context does it make sense why, of all the classrooms in all the world, fate chose this one. Here, squirreled away in the narrow confines of the "mud hut," a small, single-story building used by the KU School of Architecture &amp; Urban Planning, a group of students in room 140 has less than two months to build something for the people of the Seventh Ward of New Orleans.

A mutilated mime, a prognosticating photo-copier, and a cafe on the edge of hell-no, it's not the set up to an elaborately lame joke, but instead just a few of the supernatural subjects of "Heartland Horrors." Conjured up by local production company, SenoReality, "Heartland Horrors" tells seven terrifying tales of demonic depravity that were filmed almost entirely in and around Lawrence.

Adrianne Verhoeven aka Dri has been singing feverishly for a decade or so, first as a member of The Anniversary and now with Fourth of July and Omaha's Art in Manila. Though she's always been happy to share the mic, it's all Dri on her debut solo album "Smoke Rings." Due out this week on Lawrence's Range Life Records, the album marks a left turn into poptronica and blip-hop.

Townie guide to... going green at the grocer

Don't let the somewhat "kiddy" look of the graphics deter you from experiencing one of the best games on the system Tools of Destruction is excellent.

Gov. Kathleen Sebelius, a Democrat, will be asked about her future, state budget problems and inability of Kansas Democrats to make gains

My Own Private Power Company

By now everyone is probably familiar with the energy savings produced by compact fluorescent light bulbs. We're thinking bigger at our house. We are thinking of installing our own personal wind turbine. 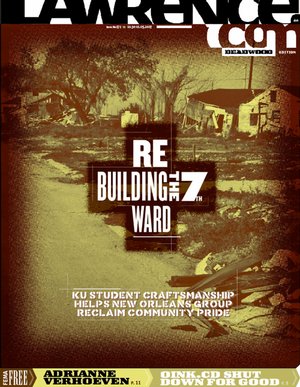