Can't See the Forest for the Weed

Da herb. Bette Hulser couldn't stand it, wouldn't tolerate it and was estranged from her son because he smoked it. Things began to change in 1991. That was when her son, Mike Mallonee, fell again, this time into a scalding vat of beans at Giorgio's in Topeka, where he worked as a chef.

Something about jazz-it never feels quite at home in the wrong environment. Like a hearing some Coleman Hawkins performed in his hometown performing arts center-posh-with a bunch of wannabe rich, white-haired white people filling out the seats (all reclining, all with armrests). So what?

Think that the fine art world is stuffy, elitist and not nearly nude enough? Then Dr. Sketchy has just the prescription for you. Begun in Brooklyn by pin-up artist Molly Crabapple in 2005, Dr. Sketchy's Anti-Art School is a saucy cocktail of booze, bosoms and brush-strokes that's spread like a French social disease across the globe.

All hail 'The King of Kong'

An engrossing and funny documentary about a subject most people could care less about, "The King of Kong: A Fistful of Quarters" covers the intense rivalry between two giants of the classic arcade game community.

Like furtive spiders, charities are hiding in every corner-among houses in seemingly ordinary neighborhoods, in back rooms of buildings, under your bed, everywhere. This is what Maggie Bixler says.

Clint Eastwood's second World War II drama of the year, "Letters From Iwo Jima" is a more focused film than "Flags of Our Fathers," riffing on the classic anti-war themes of the best of American war movies. Ironically, it is almost entirely subtitled and spoken in Japanese. The soldiers of the Empire look awfully familiar, and many of them don't believe that the war is a good idea. Nevertheless, they will fight to the death against insurmountable odds for a country that knows they will perish.

'The Fountain' makes up for lack of suspense with universal truths

If you have the patience to spend (it's a rather short 96 minutes actually), Darren Aronofsky's "The Fountain" will reward you with brilliant poetic imagery and a transcendent feeling. If not, you'll prove once and for all that you have no imagination and be left with three stories about death and rebirth with no seeming narrative suspense at all. 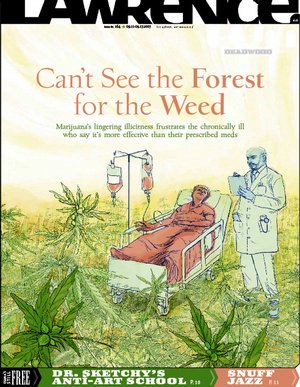