Clare Doveton's past is new again

It's the perfect season for this Clare Doveton show. The fields, harvested to the soil, are down to their elemental basis. Likewise, Doveton is exploring, through her painting, the idea of a personal fallow period.

In Lawrence, ain't no issue that puts fire in the bellies of the citizens quite like this one: Should a highway be built through the wetlands south of town? Depending on one's opinion, the South Lawrence Traficway would either desecrate this nature preserve for the sake of convenience. Or the SLT would provide a long overdue route around town, clearing up the grinding traffic on 23rd Street. Perhaps it would do both. The question is... which is more important?

It's not the size of the film, it's how you use it. The Manhattan Short Film Festival is hoping to spread that sentiment to an ever-expanding international audience and dispel any inferiority complex Hollywood's diminutive sibling may have about itself.

iD invites his friends to the "Avatar Hotel"

Since moving to Lawrence in 2000, rapper Isaac Diehl-a.k.a. iD-has been releasing albums at a prolific clip under various guises: Archetype, The Find, iD & Sleeper, Rain Closet and Lost Cats. With his hands dipped in so many honey pots, the fecund lyricist saw fit to assemble an odds-and-ends collection that offers a wide-angle view of his cluttered consciousness.

In David Cronenberg's latest film, the narration from a dead Russian girl's diary provides a jarring dash of naÃivete that is in stark contrast to everything that has come before it. She speaks of immigrating to Great Britain, and her hopes and dreams once she arrives. What awaits her, however, is an awful life as a sex slave for the Vory V. Zakone, a first-generation Russian mob family.

Townie guide to... Birthin' some babies

Sony seemed so set back by the reviews that they sent out a "Lair Reviewer's Guide" to the gaming media, presumably to teach us how to review their crappy game. 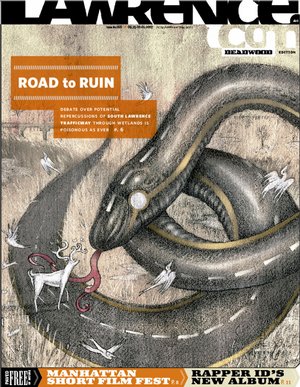