Life Outside of Man and Woman

Matthew Blankers is scared of the men's room. Sometimes, on the KU campus, he walks into one, and if it's crowded, or cramped, or if he just can't summon the nerve, he heads to the sink, turns on the water, washes his hands (la-di-dah) and walks out in search of another.

The Allen kids are a complicated set of sibs right up there with Abel and Cain or Donnie and Marie. Brett Allen makes abstract acrylic paintings. Maggie Allen made further abstractions of some of these paintings using colored pencils. They decided to conjoin these twin images into a brother and sister show called "Pareidolia."

If marriage is a covenant to stick it out for better and worse, then Kristen May and Brian Little are in it for the long haul. As half of the Kansas City band Vedera, the couple has already endured trials like losing all their gear on the road and fighting a legal battle to keep their old band name (Veda).

Former KU football standout Charles Gordon, now a cornerback for the Minnesota Vikings, once bowled a 244, he tells Breaking News. It was his high score. The next game, he bowled 244 again. He has yet to replicate the feat.

Being tested at Missouri fort. 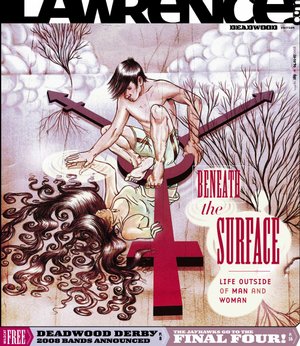