The Chic Shall Inherit the Earth

Trivia question: When do bags upon bags crammed with neckties-enough to wear a different one every day for maybe two years-come in handy? Answer: When you're a crazy-ass fashion designer. When you're sewing an entire gown out of ties. When at least 150 go into the skirt alone.

In an adorable pairing likely to induce diabetic shock, the Nintendo Wii and small furry animals are being combined for an insulin-eradicated good time. The Lawrence Humane Society will be holding a Wii bowling tournament to raise money for its many critters, and some of those critters will even be on hand to inspire you to spay and neuter the competition.

Hey young buck, you think the recent Mass on Mayhem Street was wild?

Townie guide to... veisalgia (aka hangovers)

Nelson-Atkins Director Marc Wilson on all things art in K.C.

It's springtime, reader, and what better time to go for a visit to a fine art museum?

Let there be no doubt that Nintendo is in the driver's seat this year. 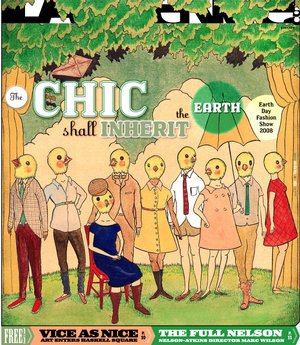