Looking for the online-only podcast preview of The Cast Pattern's new album? Blam-there it is.

Two best friends, 20 years of suspicion in the disappearance of Randy Leach

Note: This story is about two men, now in their late 30s, who were suspected of having something to do with the mysterious disappearance, 20 years ago this month, of Linwood teenager Randy Leach. While they are by no means the only two people who have been suspected over the years, their lives have been fundamentally altered by the "witch hunt," as they call it, that they found themselves part of.

Drakkar Sauna serves up a slab of homage with new album, "Wars and Tornadoes"

The music of Drakkar Sauna is just as heartbreakingly pretty as their hard-living, country-roots forebears-although the Lawrence duo is far more stable and far less dead than some of their musical heroes. It's in tribute to one of these troubled influences, The Louvin Brothers, that Drakkar Sauna has recorded its new album, "Wars & Tornadoes."

Hurl balls at chumps to save African children

Dodgeball for malaria. How do ya like the ring of that? Relive the glory days of your youth, or, if your gym teacher wasn't old school enough to make you play dodgeball, taste the quintessential gym class sport you were denied.

The KU debate team finished its 2007-2008 season atop the National Debate Tournament varsity rankings. Whooooooo!!!! National champs!!!!!!!!!!!!!!! In response, the people of Lawrence poured onto Mass. Street in ordinary numbers to shop, eat, drink and stroll. The date for a downtown parade has not yet been set.

Peter Jackson to do Halo movie!

Lord of the Rings producer/director is Executive Producing the Halo movie. With Alex Garland (28 Days Later) as scriptwriter, this is the first major step forward for game-to-movie credibility. 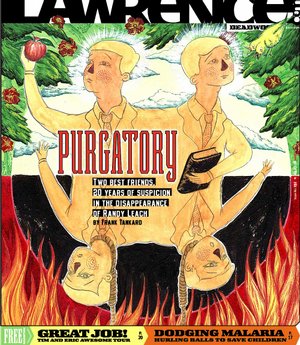