There Can Be Only One

The Third Annual Deadwood Derby is nigh. Thousands of dollars of prizes are at stake. Let's meet the contenders.

A 250-pound dwarf named Bleachy and '70s soft rock pioneer Christopher "F*cking" Cross are on the line for you. Well, not really-your life isn't that exciting-but you can simulate the experience with "Just Farr A Laugh Vol. 1 &amp; 2: The Greatest Prank Phone Calls Ever!"

The southeast corner of 12th and Connecticut has been a busy place the past couple of months. And the six young community activists sweating and toiling in the building-holding fundraisers, painting walls, ripping up tile-have a big goal:

A man walked into the Douglas County Clerk's Office and requested records for Williams, Robin. "That's not a joke," he added.

American Indian walkers take a pit stop at Haskell in their 3,600-mile journey across the United States

Thirty years ago, a number of bills were introduced in Congress aimed at terminating tribal sovereignty, leaving native matters in the hands of the states. 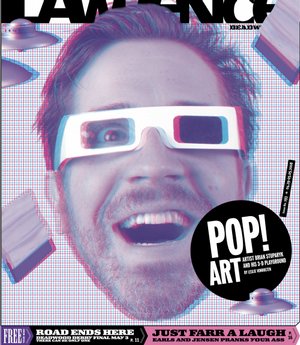