Jim Slattery has the unenviable task-some would say quixotic journey-of attempting to be the first Kansas Democrat elected to the U.S. Senate since 1930. A former member of the Kansas delegation of the U.S. House of Representatives, Slattery is now facing popular incumbent Pat Roberts, a Republican senator who has become an intractable institution since first arriving in Washington in 1967.

The Tao of Thao

The last time Thao Nguyen rolled through Lawrence, she played for approximately four people. But even that trumped her Denver show, where the stage was caked with dog shit and the entrance was littered with raw chickens. Thao's lot has improved considerably since then, with her album "We Brave Bee Stings and All" creating a strong enough buzz to merit a headlining tour and appearances at music festivals like Sasquatch and Bumbershoot. Backed by a fully loaded ensemble dubbed the Get Down Stay Down, Thao's fingerstyle guitar picking gets a jolt of laid-back funkiness and a soulful strut. As was the case on her 2005 debut "Like the Linen," Thao's voice takes center stage and soothes us doesn't it? like a lick of ice cream. The multi-talented songwriter phoned in from a tour stop in St. Louis to discuss her new record, her love of hip-hop, her hatred of karaoke, strategies for confronting sleeping audience members and how you can't wear a dress with no makeup without looking like a crazy lady. 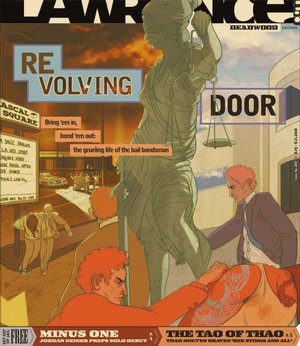