For Those About to Rock

As all ya'll college freshmen will soon discover, there's more to Lawrence than basketball, big-box retail, and three strip clubs. For our pennies, the local music scene is where it's at. We've seen a lot of great bands come and go since we started publishing five years ago-fortunately, a lot of the best ones tend to stick around. But there's always a new crop of face-melting rockers and body-shockers that we're delighted to stumble upon in a shitfaced daze, and we try to keep up as best we can. In the spirit of a continually viable Lawrence music scene, we present to you an introductory survey of local bands that totally rock.

Project Resistance mobilizes the community to combat violence against queers

As a sort of gruesome milestone, Project Resistance symbolically began nearly six years ago with the beating of Jeffrey Medis outside of a Lawrence bar. Although a full accounting of the incident has never been provided, Medis-a gay man who was then 28 years old-was assaulted while leaving the Replay Lounge in the early morning of December 6, 2002. Among numerous other injuries, he suffered a broken nose, broken jaw, and fractured eye socket. While he lay unconscious and bleeding, a friend of Medis came upon the scene and was involved in an altercation with the four alleged attackers. The response of authorities to this attack proved nearly as galling to the gay community as the attack itself.

Whatever you do, do NOT bring up Split Lip Rayfield in the presence of The Calamity Cubes. They're sick and tired of being compared to the area's reigning string-band magnates. Sure, the Cubes do perform with similar instruments acoustic guitar, banjo, mandolin and upright bass. But they'd be hard-pressed to call themselves a bluegrass band, instead preferring to identify as a bunch of songwriters who happened to learn bluegrass instruments.

Things to do in Lawrence if You're Not Quite Dead

The stuff the sleeping mule misses, but we, the opossums, see.

If you, dear reader, like to do things. And you find yourself in this place, Lawrence, Kansas, U.S.A. Then munch on this cowpie, my friend:our first (last) annual guide, coinciding with the seasonal return of the college students:a lawrence.com special presentation:Things to do in Lawrence if You're Not Quite Dead. 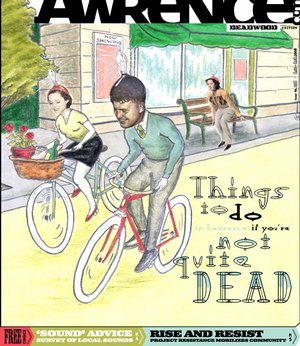