Lawrence's Transmittens traces its roots back to Cincinnati, where Jen Weidl and Danny Rowland met and started making lovely music together.

Highlights from the news that was new last week.

You might know Slick Rhodes as the song-and-dance man from Galveston, TX with a taste for whiskey-soaked women, or you might know him as the protégé of Lawrence musical institution Arthur Dodge who looks uncannily a lot like Arthur Dodge.

The mother of all bad Christmas specials screens in Lawrence

Scandinavian Santa versus the Ice Cream Bunny. Santa the Ambassador, teaching African children about the great United States. That’s the stuff of “Holy Yule: Santa in a Strange Land,” a film of mashed-up arcane video that’s touring the Midwest.

I like classic pieces that you can dress up or down

Townie guide to… Hindu for the holidays

Growing up Hindu in the United States, did you ever feel like a Democrat at a Bass Pro Shop?

It's a disturbing trend. Movie reviews are being replaced by celebrity "news" briefs every day in newspapers. Film is culture, that’s all there is to it. Anyone who doesn’t see that isn’t thinking about what they see.But who are these critics anyway? Ever wonder how that line gets drawn in the sand betwen a “credible” critic and everyone else? We are going to kick it right back in the faces of anyone who doesn’t think our opinions about movies matter. We’re the ones they make them for, after all. Now it’s their turn to listen to us. 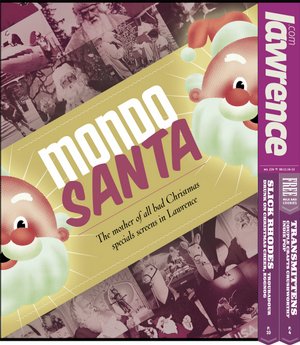