All facts in this story are real.

A clash is a-comin'. An architectural clash. A few months ago, the tide of progress seemed to roll onward in its depressing way when the developers of the proposed Oread Inn on the edge of campus offered to buy the adjacent Ecumenical Christian Ministries building.

Coming back to byte you

Three years ago, Paul Trigoso received one of those emails purporting to be sent from eBay. The email said someone had been fraudulently using his account. He needed to log in and confirm his credit card information and so forth so the company could affirm the account's validity. He followed a link, typed in his username and password and filled out his financial information. The next day he received the email again, which seemed strange. He went to eBay and read a bulletin the company had posted about scams.

You might know Paul Flinders as the Lawrence artist who paints those big-headed ectomorphs in surreal states of reverie. You may also know him from his series of birds with gangly legs. Well, expect none of that for his latest solo show, "Bleached Works."

Toss pop, punk, disco and a whole lot of Astroglide into a Cuisinart, repeatedly press "Pulse," then dump on top of a mustache orgy-now you've got the recipe for Ssion's "Fool's Gold." Finally available in wide release through Sleazetone Records, "Fool's Gold" is the infectious new album from Kansas City art-noise collective, Ssion (pronounced "shun").

What's cooking this weekend, dear reader? One idea: a play. Yes, a play! Why? Because it is free. And besides, you have not been to a play in a very long time, have you? It's written and directed by a KU senior named Adam R. Burnett, who, despite his age, is already a pretty experienced playwright, and an interesting fellow to boot.

Townie guide to... anarchy in the LK

We take a look at the games of late January

Welcome back to our blog. 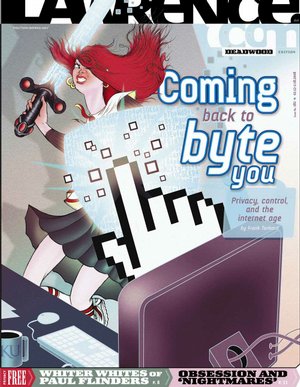