Would you, good sir or madam, care to witness a magic trick? A feat of prestidigitation so astounding-so beyond the realm of the mortal plane-your eyes may actually boil in their sockets through sheer amazement? Then behold, kind stranger, "The Amazing Ignatius"! An illusion of moving pictures, miraculously filmed with no budget in the Lawrence area, featuring bodily fluids materializing from thin air and massive piles of cocaine improbably disappearing through sleight of nostril. Snort your heart out, Criss Angel!

Congratulations! You are reading the ninth weekly installment of Breaking News. To celebrate the continued support of readers, readers like you, Breaking News is pleased to announce its first-ever giveaway contest.

Life, toilet paper, and the two-plies that bind

Picture this: You are in a public bathroom, wiping your ass. You might be using the air-thin toilet paper KU uses, or the silkier stuff that occupies the bathrooms of the Eldridge Hotel. It doesn't matter. The brand, the thickness, the softness are irrelevant at this point. Just think about toilet paper. Think about whether you have thought much about toilet paper. Now come to the library, a place for thinking.

Remember that kid in high school who all the teachers called a "Renaissance Man"? Dylan Paul Hilpman was that guy at Free State High School, and he took it to heart. Now 24, Hilpman is enjoying a full-time career as a roving stage actor in productions like "Othello" and "Fiddler on the Roof." But his booming voice wasn't simply made for the stage-it was made for actual pop music: the kind that Maroon 5 and Justin Timberlake sizzle. It's so catchy that you might want to hit him in the face-and that's cool with him, as long as you get on the dance floor.

Townie guide to... trivia under the influence

What's the purpose of the regular season?

After a less-than-stellar regular season, the Lawrence High volleyball team showed up when it counted and now is heading to state. Good strategy or bad habit?

Please check to see that seatbelts are fastened, seat backs are in upright positions and all carry-on items are properly stowed.

Welcome back to our blog tracking headlines on the presidential candidacy of Kansas Sen. Sam Brownback. Brownback received some tough questions on Iraq and his GOP presidential run from Fox News Sunday host Chris Wallace on Sunday morning. 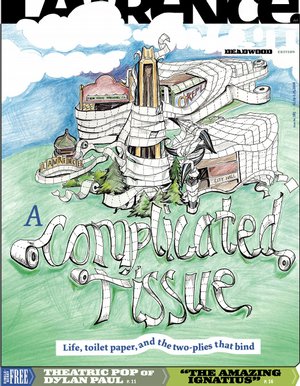