The Pen is Mighty

It's Sunday in a basement office at 14th and Massachusetts streets, and five Lawrence anarchists are doing what they do every Sunday: running a vast network of politically radical prisoners. Equipped with a copy machine, a couple computers, a printer, a fax machine and a stock of secondhand tables and filing cabinets, the small, paper-stuffed office operates as a scrupulously organized mailroom for the Allied Resistance Network.

Thoughts of a Latin King

A Q&A with Gabriel ConcepciÃ³n a.k.a. Jose Cruz a.k.a Blaze

Gabriel ConcepciÃ³n, a.k.a. Jose Cruz and best known as Blaze, was a founding member of the Allied Resistance Network and has written a number of essays on prison issues and his political ideologies. He works for a delivery company and lives in the Bronx, where he grew up.

You have to break a red wax seal to get your grubby little paws on American Catastrophe's "Excerpts from the Broken Bone Choir." The album's handmade packaging connotes a contract between the band and the listener: break the seal, and there's no going back. Imagine a motel lounge in a David Lynch movie where something bad is about to happen: woozy guitars pick out minor chords, cymbals crash and a commanding baritone chants "hang 'em high."

Four summers ago, a skinny kid with a big, Dylanesque mop of hair named Patrick Clendenin prepared to head east. "For a long time I just wanted to go to New York, without having visited," he said at the time, "just because of its reputation for being the city of opportunities and chances for what you dream about."

The Great Lawrence Loaf Off pits meatwad against meatwad

Do not be fooled by the meatloaf's unassuming stature within the annals of America's gastric history. That sculpted brick of substandard beef and kitchen flotsam is coated not only in ketchup, but also in glory. As with the breadcrumbs holding it together, meatloaf binds us as a people. Lawrence's Committee of the Loaf recognizes this fat-dripping greatness and is aiming to spread the good loaf's gospel far and wide with the first annual Great Lawrence Loaf Off.

Last week, Breaking News crafted its first-ever essay contest. Readers (like you!) were asked to send essays to frank@lawrence.com or to our physical mailing address, stating, in any form, why they deserve the Special Prize.

Despite its minor flaws, DMC4 is still a blast to play through, and should please longtime fans of the series.

The Dividing Line is searching for Lawrence's Hidden Heroes, people who go out of their way to make the high school sports world a better place without asking for anything in return. Know one? Nominate them here. 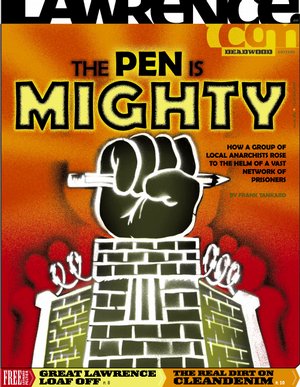