Shred with the World's Best on Guitar Hero III ...right here in Kansas

It's 9:30 on a cold Saturday morning and no one is answering the door. I've traveled an hour to Lee's Summit, to this cul-de-sac of new adobe-style townhomes, to knock on this door, the door of the region's Guitar Hero legends. Another knock. No one answers. Drew Gutierrez and Marques Watson aren't just the best Guitar Hero III duo within an hour of Lawrence. They are ranked, as of this writing, No. 1 in the world on 'Hard' on Xbox Live.

As a single-player game, Rock Band is comprehensive and very enjoyable. As a party game, it's one of the most entertaining gaming experiences you can have.

Also: A stop in Wyoming.

The local musicians behind last year's success come back for one more go.

Meth can be funny after all. 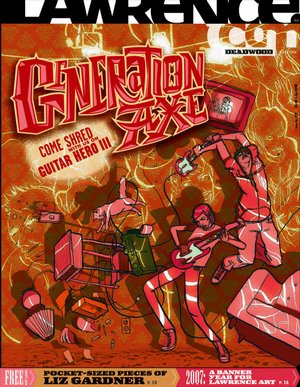