Provocative "There Will Be Blood" the Best Movie of the Year

From "Citizen Kane" to "Wall Street," cinema has been a fantastic forum for examining the frayed edges of unchecked ambition and greed. The latest film from Paul Thomas Anderson follows single-minded oilman Daniel Plainview to show us the dark side to this particular American dream-not knowing when to give it a rest.

Gay, out, and in the greek system

Yes, Jordan Williams says, he hears locker room talk. Sex talk, that chick's so hot, that dude's so gay, yes, yes, he hears it. He's in a fraternity. "Wow, Matthew McConaughey's really attractive," he might chime in. And then he says what happens: "The room goes silent."

Witches, war, and a cow of the Apocalypse-examining the socio-political geography of Kansas has never been so freaky. Although it's called "Bleeding Kansas," Sara Paretsky's novel is about as far removed from a dusty examination of the Free state's well-trod history as the title might imply.

Sheena Shippee was taking a women's history class at KU in spring 2005. The professor gave the class two options: write an in-depth research paper or sign up for service learning in the community.

...hang up and try again edition

Man-sized ice chunks drifted down the Kaw River toward Bowersock Dam. It was a tranquil sight: :A blue sticky note stuck to a parking meter on the 600 block of Vermont Street warned: "This meter ate my money": 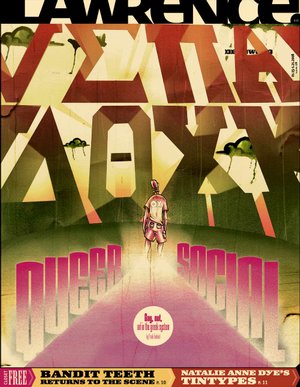