Click. Cole Robinson has just entered a third game. In heads-up no-limit Texas hold 'em online poker, where a card or a bet comes every few seconds, three games at once is about all Robinson can handle when he's feeling sharp. And today he isn't. "Too much caffeine," he says distractedly over a drone of rapid-fire mouse clicks. "And I kind of need to eat something."

This August, Lawrence's E.M.U. Theatre will celebrate10 years of broke-ass independent productions that somehow manage a consistent quotient of awesomeness. Such undertakings rely on the tenacious dedication of the E.M.U. crew, the support of the community and places like Ecumenical Christian Ministries, which has hosted countless community events throughout the years.

Though they claim no direct lineage to their eastward municipal namesake, The Eudoras do own one of Lawrence's most distinctive honors: being the first band to play at the Replay Lounge. Of course, given the cock-and-bull yarns typically spun by Kory Willis and Jon Harrison, that could be a load of cockamamie.

This town just ain't big enough for two packs of puppets. To prove the point, The Felt Show and the Shitty Deal Puppet Theater will settle their raging Tourrette's turf war in mortal combat. What began as innocent smack talk in lawrence.com's comments space soon escalated into full-on puppecidal mania.

We take a look at two remarkably similar portable titles from Konami.

Brownback is second best fundraiser for quarter - in West Virginia 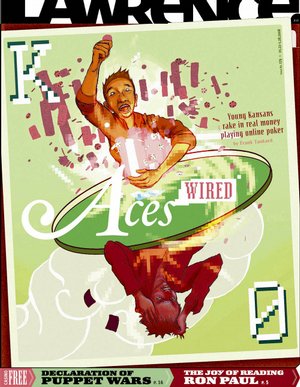