Other than 18 years and hundreds of Paw shows, there ain't a whole lot separating the musical persuasions of Grant Fitch and Jason Jones. The duo that now composes Lawrence's New Franklin Panthers met while working at Mass. Street Music and quickly hammered out a malleable setlist of instrumental power-rock

Attention, reader. A little advice to heed: Put down this paper, go to the bank, finagle a loan, buy a camera, and start a stock photography business. Call it "Diverse Fun." People like Jeff Immer would go to diversefun.com and pay for your pictures. It would be easy, and you'd get rich.

Kids film the darndest things. Like a disturbing hallucinatory journey through mucous and madness called "Influenza." Or a one-man band rendition of Cutting Crew's "(I Just) Died in Your Arms Tonight" featuring wicked keyboard solos and rudimentary stick figure animation. And even "B for Banana," a '70s cop show parody replete with fake mustaches and serial fruitings.

The governor's son, in the mansion, with a prison-themed board game

The big truck pulled up to the governor's mansion on a frigid morning two days after Christmas. In 600 boxes from China, John Sebelius' vision had arrived. The driver climbed into the back of the truck and a crew of friends Sebelius had solicited lined up and hauled the boxes to the cleared-out two-car garage. Fifteen minutes later the truck was gone, leaving the garage packed with a mountain of boxes-3,000 board games into which the 23-year-old governor's son had sunk $45,000 of borrowed money and a considerable stock of his future.

GOP presidential candidate U.S. Sen. Sam Brownback weighed in on earlier comments from Gov. Kathleen Sebelius that the National Guard did not have enough equipment to help response to the Greensburg tornado.

Brownback will join nine other candidates in Thursday's debate at the Reagan library in California. 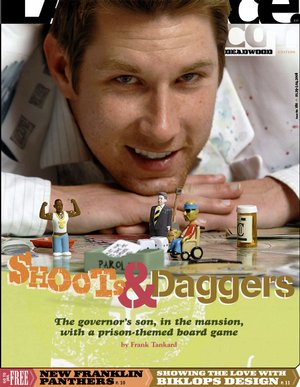