Reports from the Badlands

A man walked back from the Kwik Shop to his car, an old boat of an Oldsmobile with scuffed blue paint parked at pump number two. The smell of gasoline was strong. Unleaded was going for $3.82, $3.80 with a Dillons Plus card. The man swung open the driver's side door, revealing a burgundy Holy Bible planted on the dash, and exited out the south entrance of the 19th and Massachusetts service station. An aqua green car driven by a young woman playing R&amp;B music at a high volume quickly replaced the vacated spot. The young woman walked into the convenience store. All four pumps were occupied. Three minutes later all but one were empty. This was Lawrence.

*all news this week based on reports received from the future

More than most bands, fans have certain expectations for what they want a Reggie and the Full Effect record to sound like. These mostly teenage minions fell in love with Reggie when he was a different man: a younger, goofier, (even) more immature version of his present-day self...

Julian Wright is about to venture into the real world, but he's already learned a valuable lesson where his words are concerned. Meanwhile, with football season still five four months away, Aqib Talib is the subject of some significant buzz. Plus, YouTube fun returns.

So KU needs someone to step up, be the vocal leader, get everyone going and awaken the Jayhawks from their intensity-lacking slump. Here's the perfect guy. And guess what? He's very available. Also, a different reason why the 10-day layoff is good for Bill Self's bunch. 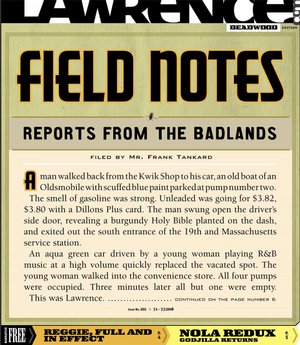