For some convicts, KU's Defender Project is the final hope

By the time a prisoner's letter reaches the mailbox of the Paul E. Wilson Defender Project, the hope of freedom has generally diminished to the level of pipe dream. Many of the letters come from prisoners complaining that their attorneys-often appointed by the court-didn't meet with them often enough, didn't show much interest in their cases, didn't introduce key evidence, generally didn't fight for them. In other words, the prisoners complain of being shortchanged in the shuffle of an overtaxed system.

A Display of Poetic Fireworks in the Dead of Summer

Four Lawrence women-a practicing witch, a daughter of illiterate Tennessee sharecroppers, a bisexual anarchist and a poetry professor-are reading poetry in the same room on Friday, and they're afraid that if you attend, you might explode.

Ted Nugent is insane. He is certifiably bat shit bananas. And he is an American treasure. This axe swinging legend has bludgeoned his way to the top of the rock pantheon, selling more than 35 million albums, playing over 6,000 concerts, and pissing off nearly everyone on the planet in the process. When not penning such romantic chamber pieces as "Cat Scratch Fever" and "Wang Dang Sweet Poon Tang," Nugent is an avid hunter and proud, flaming conservative. 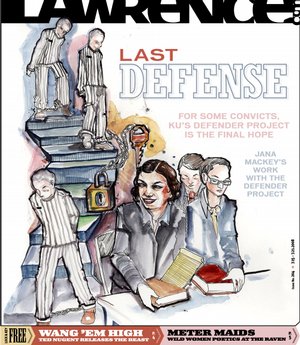