› Wakarusa 2008 schedules and other Waka-ssentials are available mobile-style at m.lawrence.com or here by individual day: 1 | 2 | 3 | 4. The printcast of our guide is pocket-compatible upon printing.

Sign #367 that Lawrence is a strange place: Gas prices are rising, signs of the metalocalypse are running crazy, you can hardly plug into the news without being deluged with stories like one The New York Times published last week-"Americans are giving up their gas guzzlers, making fewer trips to the mall and even riding public transportation." Meanwhile, in Lawrence, money is tight at City Hall. And city commissioners, getting ready to plan next year's budget over the next few weeks, say many things may get cut, including the bus system, the T.

Businesses see the bio-benefits and financial perks of shoving leftover food up their compost piles.

Josh Millstein burrows into a large pile of dirt in downtown Lawrence. He removes a piece of plastic and inspects the mound's innards: roly-polys, a rotting orange, brown sludge. Yep, everything looks right.

When last we spoke with him, Dan Watkins was guardedly optimistic about Barack Obama's chances to secure the nomination of the Democratic Party. That was way back in November-a political eternity ago-and the freshman senator from Illinois, in a historic and sometimes histrionic primary campaign, is now the presumptive nominee.

Everyone's favorite moderately-reliable picks return for a season finale to ring in the new year down in the Sunshine State. 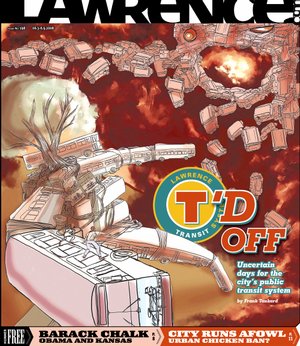