Jody Wood and the power of the temporary

You can tell a little about Jody Wood's disposition toward her art from the way she handles her air mattresses made of pig intestines. Removing one of the two brittle mattresses from a corner of her studio in KU's Art and Design Building, she handles it not exactly gently, like most people do with a piece of art they once slaved over.

Music in the Air

Living Proof: Our occasional reminder that not all people are bastards

Lawrencians leave for Burma: "It's time to do something about it."

And now, for the latest installment of the semi-regular Breaking News feature QUOTATION OF THE WEEK. 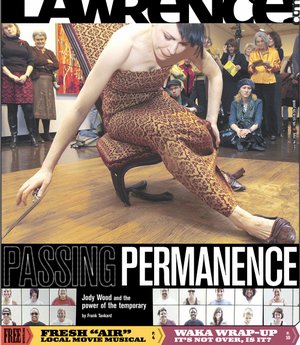