Waiting for his Shot

Where the four ropes enclosing the ring are frayed, duct tape does the job. The canvas is stained with blood and dirt. A fan blows loudly somewhere overhead. Harsh fluorescent lights shine. Mirrors on two sides of the ring broadcast Marcus Oliveira's punches to a dozen kids sliding side to side, gloves up, honing their footwork along the red carpet of the humming Topeka gym.

Letter from the Editor

This week we published issue No. 200 of our Deadwood Edition. In some ways, this rag has come a long way these last five years. In other ways, we're doing the same thing we've always done-lovin' on Lawrence, lovey-dovey-style and tough-love-style. We hope you feel pretty much the same way.

Ah, summer-the monarchs are returning, the children frolic gaily at the pool, and crime movies dripping with post-war tension featuring protagonists of moral ambiguity and women of predatory sexual proclivities are projected on the side of a parking garage in downtown Lawrence. 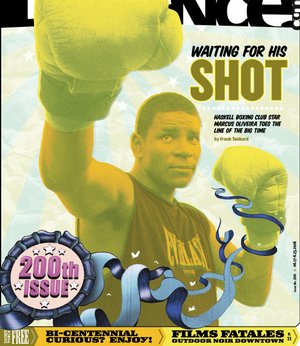