Looking for the online-only podcast preview of Censura's new album? Blam-there it is.

The Triumph of 'The Diving Bell and the Butterfly'

At first, it's a little difficult to get your bearings. The camera wanders, is never completely in focus, and the audio is muffled, cutting in and out. It pans back and forth to simulate the movement of the eyes. A narrator begins to speak. Seeing the world through the limited perspective of a bedridden man wouldn't normally strike one as the most cinematic of ideas.

With Hollywood treading in its own testosterone, female filmmakers find redemption in indie film

Six percent of the 250 top-grossing movies in the United States last year were directed by women. This means 94 percent were directed by men. And yet women make up roughly 40 percent of the film students at KU, according to the Department of Theater and Film. So what happens to all of them? It's one of those problems that never seems to go away. This story, which is about women in film, and why so few of them occupy the most important roles behind the camera, could have been written 10, 20, 30 years ago and be virtually the same.

If the education you received was, like many in the United States, devoid of American Indian history, except maybe as an afterthought, consider this weekend a rich opportunity to catch up. The 4th Annual Stories N' Motion Film Festival at Haskell Auditorium, packing in 10 documentaries made by Native Americans, explores a wide range of the most dire problems and proudest accomplishments in Indian Country, past and present.

The DeWayn Brothers are coming to your town

Like most bands that you might stumble upon at the Walnut Valley Festival in Winfield, Kansas, The DeWayn Brothers pen twangy tunes about hearty country livin' (the non-Cracker Barrel variety). They embrace the culture of whiskey, prison, bacon, and more whiskey while avoiding said sins jes' enuff to stay out on the road 200-plus dates a year.

Are you prepared to make a gift? It's a malleable question. Say it through clenched teeth, and it's a threat. Add some pep, and you sound like a perky telemarketer. One thing about this opener to the artists' page of the Lawrence Arts Center's 28th Annual Art Auction is clear: Artists, check your ego at the door.

If you've ever hankered for a big slab of beef on a bun, paired with a cold brew, and served with a side of hurtling Italian balls, then Jo Shmo's is definitely your bag.

If you dig furry creatures and groove on sounds, here's something you may want to tune your mind to, compadre: 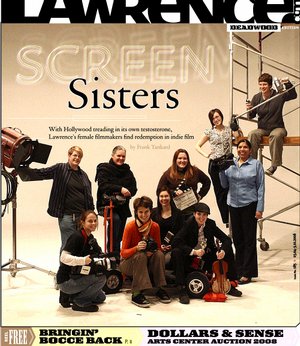