In the gaming world, "sure things" are extremely rare. Despite this, I don't think there was a doubt in anyone's mind that Super Smash Bros. Brawl was going to be an instant classic.

In search of the phantom Menace

It was a dark fall night one decade ago when Marilyn Horsch says she first saw a mountain lion. She was in the final stretch of her daily drive home from work in Kansas City when, near the intersection of Stull Road and E. 400 Road, the full-grown cougar sprinted across the beams of her headlights, 25 to 30 feet in front of her.

Night of the Living Film Geeks

For less than the price of a medium Mr. Pibb at the movie theatre you can get a movie and a PBR at Midnight Movie Madness. And it'll be a good movie, too-none of this "Jumper" crap.

Paint tubes on the floor, canvases stacked against the wall. Themes emerge, with the occasional odd surprise poking through (abstractions, thick paint, scratch marks, then a rabbit shooting out of a sewer pipe?).Pan out: an old couch, a work table, computer. Then a stage, with mics. Some chairs.

Oftentimes, the prevailing logic regarding the Kansas City and Lawrence hip-hop scenes is that our homeboys could be worldwide if they just got organized. Enter INnatesounds. The brainchild of producer Miles Bonny, INnatesounds began to take shape when Bonny's former SoundsGood collaborator Joe Good "retired" from the game (time will tell if Joe-Z gets back in the ring).

A Slit in Time

Ari and punk legends The Slits roll into Lawrence

Punk pedigrees don't come any more bona fide than that of Ari Up. Lead singer of the Slits-the seminal all-girl British '70s punk band that toured with the Clash and the Buzzcocks. If starting your own band at 14 years of age isn't punk enough, how about adding "step daughter to John Lydon of the Sex Pistols" to your resume and suddenly we have one punk as fuck Brit.

A car was seen lodged on a low wall enclosing the entrance to the parking lot of Sigma Phi Epsilon fraternity on 17th Street between Tennessee and Ohio streets on Saturday afternoon.

Disabled veteran about to be evicted

Gary Connellis and his family are about to be evicted from their Leavenworth apartment. 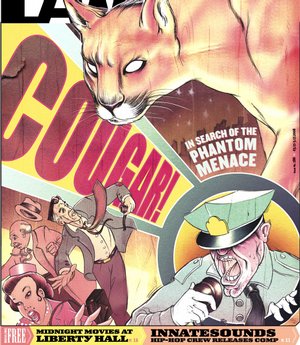