› Be numero uno in our bracket contest and win a 4gb iPod, courtesy of Game Nut Entertainment - entry deadline is 10 a.m. Thursday!

Nick "The Beast" Scott's rise in the world of wheelchair bodybuilding

It's a Wednesday morning at Ottawa Nautilus Family Fitness Center, a furniture store-turned-gym on Main Street in Ottawa, and, like usual for a weekday morning, Nick Scott is one of the few people inside.Tomorrow, Scott is boarding a plane for the National Wheelchair Bodybuilding Championships in Palm Beach Gardens, Fla.

:A special Hamm's on the rooftop report

Three young men were seen drinking cans of Hamm's beer on lawn chairs on the rooftop of a house on the southeast corner of 19th and Alabama streets last Wednesday afternoon.

March. Mustache. Madness. Nobody knows precisely how the craze blew into Lawrence, or when. What's known is that in the hazy recent past, in this circle or that, hair-thick and thin, coarse and fuzzy, black, brown, red and blond-has been sprouting on upper lips at bewildering rates in the month of St. Patrick.

Remember six-inch voices? Those would be about four inches too long for a Doby Watson concert. The 21-year-old songwriter pens tranquil numbers that emphasize sparse arrangements for acoustic guitar and voice: the only two instruments he typically carries with him on his frequent tours of D.I.Y. folk venues.

Wants soldiers to meet people besides other soldiers.

"The 1st Squadron 4th Cavalry out of Fort Riley, Kan., was a long way from home." 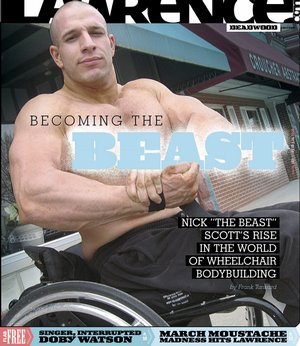