A buyer's guide for the down and out

If art according to your walls is some water-damaged drywall and your roommate's Hendrix poster from freshman year, fret not: you can be an Art World Player by summer. OK, so maybe "Player" is a bit strong, but Collector: now that we can do, easy. There's a learning curve, but it's a fun one. And trust me: it's more about the hunt than the money.

In Kevin Willmott's first two films, the central theme was race. In "Ninth Street," it was the story of the small black section of Junction City, Willmott's hometown, seen through the eyes of a pair of winos. In the Ken Burns-style mockumentary "CSA: The Confederate States of America," race was given biting satirical treatment in an alternate U.S. history supposing the South had won the Civil War.

Guest column: The Iraq War and the Presidential Election

With all eyes fixed on the forthcoming election, we must consider the issues that will face whomever becomes our next president for these are issues that we and perhaps even our grandchildren will have to cope.

Kansas City record label curbs its name but not its enthusiasm

"Maybe we should just sleep on it," Tim McGraw once sang. Unfortunately for Curb Appeal Records, McGraw's record label (Curb) didn't take his advice to heart. One cease-and-desist letter later, the Kansas City-based label is changing its name to Appeal Records.

Daniel Tosh gets completely serious about comedy in Lawrence

Daniel Tosh, and his particular brand of bug-eyed deadpan, has carved out a niche for himself in the comedy world as being a pure stand-up comic. He doesn't have a TV show, he's not trying to be taken seriously in some crappy indie film, and he's not Dane Cook-he just tells jokes.

Townie guide to: blogging your brains out

A man who said he'd recently moved out of a homeless shelter and into a co-op approached a physics student heading to a coffee shop in downtown Madison, Wis. He told him that for $5 he could tell his future, or his past. "I already know my past," the physics student said. "So do I," said the man, 41.

Local business leaders, who have spent years working to brand the community as something other than a prison town, worry that the move will make it nearly impossible for potential residents or new businesses to focus on Leavenworth's beautiful brick buildings or the legend of "Buffalo Bill" Cody, who lived in town for years. Yet there is no denying the economic bond between Leavenworth and the prisons. 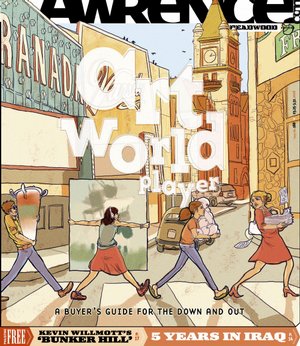