Not a Drop to Drink

Scarce water, stagnant lives on the nearby Kickapoo Reservation

Heading east on K-20 Highway toward Horton, a sign said COMMUNITY CENTER and pointed right. Down a short gravel drive, a warehouse-like building was empty on a warm Thursday afternoon except for three women sitting around a table and smoking. "Can I help you?" one asked. I'm here to do a story on your water. "Don't drink it!" one said, and the three women laughed.

The enigmatic Justin Roelofs and his first solo show in Lawrence

In three years, Justin Roelofs has recorded two albums and set foot on stage exactly once, guesting with Ratatat in San Francisco. So, for fans of his music, his show this week in Lawrence is not to be missed.

Beyond the Valley of the Blow-up Dolls

People have said it will be the most controversial film of the decade, and that's not an understatement," modestly suggests Kansas filmmaker Steve Balderson of his next film, "Watch Out." "It could very well be the most explicit non-pornographic film ever made."

It's a colossal mound of mud today. A big, wet dump protected by a chain-link fence. Such is the construction zone west of the long-awaited addition to KU's Student Recreation Fitness Center.

Big hail fell on 17th Street at 5:58 p.m. on May 1. Car alarms began sounding in the parking lot of a fraternity. A resident clothed in a T-shirt, shorts and flip-flops screamed in mock agony and climbed atop a sport utility vehicle, yelling "help." A similarly clothed fraternity boy ran across the parking lot to stop one of the alarms.

My impressions of GTA IV, updated several times daily as I play through the game for the first time

PSP truly is the portable Playstation 2

I truly felt like I was playing the future of handhelds. All the hyperbole that the PSP was basically a PS2 but portable all became reality. It really is that great and renders 3D environments with the same savvy as its console cousin. 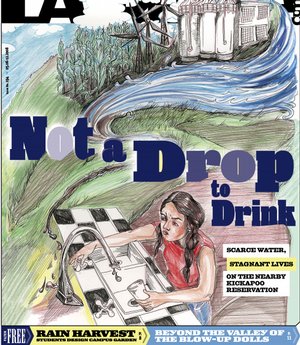