Richard Morantz lives in an old trailer. A couple of holes have worn their way through his blue trousers, which are held up by a pair of suspenders. His curly, overgrown hair is thick with humidity. Pulling up the gravel driveway to his 80-acre spread south of town on a warm spring day, you get the feeling this would be a good place to hole up when the rapture arrives, but about the last place you would think to go for a round of golf.

Johnathon Ford grew up with an appetite for movie soundtracks, Disney scores and classical music. Those obsessions inform his body of work as Unwed Sailor, an instrumental band that has routinely changed members and styles during its 10-year run.

Kickin' the Truth to the Youth

Who is that rapper poisoning the delicate minds of our youths with the hippity-hop? After searching low and high, we found that it's none other than local rapper and BombSquad member Richard "GQ" Thomas.

For better or for ill, the supremely unorthodox Dennis "Boog" Highberger has come to epitomize the supreme unorthodoxy of the city where he serves as commissioner. Since 2003, the gangly guy seen zipping around town on his three-wheeled recumbent bicycle has served on the Lawrence City Commission as the reliably progressive voice of the people.

Townie guide to... veggin' out

What system do you play?

What games do you play and why? 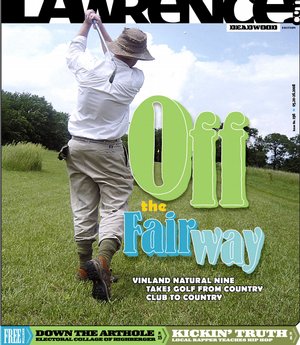