› Wakarusa 2008 schedules and other Waka-ssentials are available mobile-style at m.lawrence.com or here by individual day: 1 | 2 | 3 | 4. The printcast of our guide is pocket-compatible upon printing.

In lieu of serious, tedious, same-as-previous-years', read-by-no-one "journalism" about the Wakarusa Festival, we present: Dam Libs!

Rails, roads, and wilderness: the endless search of the tramp

Two days passed in northern British Columbia. Then three. Cricket was in desolate country waiting for a freight train, stuck at one of those crossroads that most folks experience only in metaphor. The question was inevitable. Do I want to keep doing this?

A year later, the tornado-ravaged town rebuilds in the eye of a media storm

:storm from the shelter edition!!!!

Trees shook. Rain fell. Thunder crashed. The electricity went off. It was the earliest hours of Saturday, May 24, in Lawrence, Kansas, U.S.A.

Bodies on a bender

Not too long ago, Ron Gaches dreaded walking into the capital building in Topeka. It wasn't his lobbying job or the politicians that bugged him, but rather an agonizing foot pain amplified by marble floors. "You can't imagine a less forgiving material to be on all day long," he says.

The Greene Room comes to you live from Allen Fieldhouse, where KU returns to its home floor after Saturday's foul-fest in Columbia. The Jayhawks, remained undefeated, though, edging Mizzou 76-70. 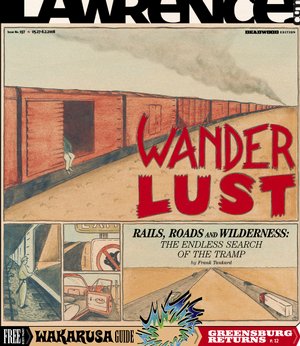