Split Lip Rayfield started taking shape about the time Bill Clinton was getting situated in the oval office. Neither Eric Mardis, Wayne Gottstine, nor Jeff Eaton figured they'd still be going at it 14 years later, nor did they figure they'd have to persevere through something as difficult as losing their friend and collaborator Kirk Rundstrom to cancer. That tragedy nearly derailed the band, but the trio has been picking up steam and new fans ever since returning to the stage a year ago.

"Get Your War On" cartoonist David Rees releases collection, despairs

Who knew that taking benign clip art of office toadies and filling their word balloons with blisteringly profane political commentary would propel you to the upper echelons of contemporary American satire? David Rees, apparently. His comic strip, "Get Your War On," is carried by Rolling Stone and alternative newspapers across the country (including, FYI, lawrence.com at one point) and has recently been adapted into an animated series appearing online at The Huffington Post and 23/6 News.

George Kimball has been many things: rebel, novelist, journalist, boxing aficionado. He blew into Lawrence like a harbinger of change at the beginning of the 1960s on an ROTC scholarship to KU and stuck around off and on throughout the turbulent decade. He ran for sheriff of Douglas County in 1970, the year the Kansas Union was firebombed and riots swept through the city, and was seen as a spokesman for the counterculture.

If you don't care for lawrence.com when it gets really self-referential, this isn't for you. 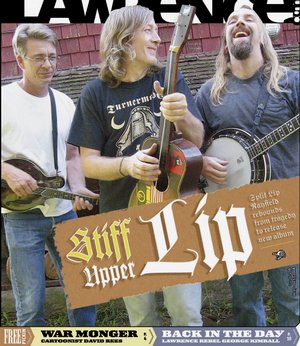