Probing the mind of the youngest voters

Everyone said the world would change and it did. And the events that followed the tragedy-no need to list them here-were put into motion before she was a teenager. She turned 18 last week and now, in the midst of the economic crisis, she prepares to vote in her first election. As things fall apart, she can safely say that the mess of a country she inherits is one she did not help create through the electoral process.

Lawrence's busiest string band is anything but Flat

Well I'm rolling down the highway I got nothing behind me but blue sky / I'll keep on driving this truck out west until the day that I die / Got a gun in the front seat and a bottle next to me / I got kicked out of Kansas for dealin' LSD. So begins Deadman Flats' debut album, "Antlers." The twangy collection blurs the drunken line between fact and fiction, chronicling the misadventures of everyday boogans and dudes who pick up greeters at Wal-Mart.

Letter to the Editor: Don't Look Down

America falls off the Financial Cliff

It's a long drop from the top, with many boulders and jagged points to hit on the way to the bottom. Unfortunately, for those scared of heights and without golden parachutes, America is loosing its balance on the edge of the cliff. Over the course of the last two plus years the enormous financial credit bubble has burst, and with notable drama in recent months like never seen in our lifetimes.

Hey, did you hear the one about stuffing children into a suitcase? How about the one about the fire and brimstone preacher evangelizing for Norse trickster god Loki? The abortion/rape/hand-job/Jew joke? If so, then you've obviously been to "Bring Back Comedy."

A note to "fiscal conservatives" who voted for this President 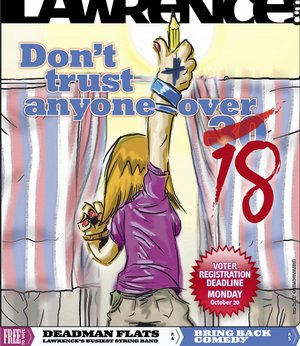