It's another overflow Monday evening at the Free State Brewery, and they're wobbling like bowling pins out on the patio. In a ritual instigated in large part by bargain-priced beer, townies of all stripes gather in number on this night to jostle, slosh on, and holler at each other. The din of the place is a physical presence and the tap handles move like metronomes. Hippies hang with lawyers and students debate professors, boundaries blurred by conviviality and a torrent of Copperhead Ale.

"'Sex, a.k.a. Wieners and Boobs' is a play written by Joe Lo Truglio, Micheal Showalter, and David Wain-the guys who did 'The State,' 'Wet Hot American Summer' and 'The Ten.' It's basically a kids show, but for an adult audience. It's centered loosely around Jack Greenburg-played by Tim Vickers-the new sheriff of Teaneck, NJ, and his campaign to rid the town of hookers and gigolos, controlled by the evil Tad Theaterman, played by Aarron Ross."

It was only a couple years ago that Suzannah Johannes started writing songs and performing; first as a solo artist, now as a full-bodied affair that plays to a talented Lawrence cast's laid-back skill set. 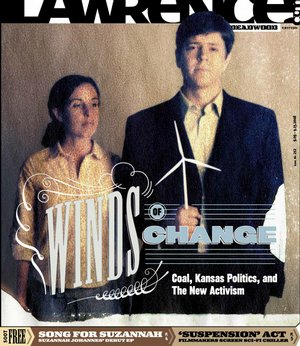